The Fujitsu General Group's business concentrates on the air conditioners, information and communication systems, and electronic devices sectors, and has made great progress. And, we will continue to promote sustainable management with an eye to the future, 10 years, 20 years, and beyond, without pursuing only short-term results, and aim to become a corporate group that contributes to the realization of a comfortable, safe, and secure society through the creation of new value.

The Fujitsu General Group, since it began its role as a manufacturer, has always grown through technological progress and innovation, being the first in the industry to introduce leading-edge products to the global market.

With an eye on the next 10 to 20 years, we are working to create new value through innovation and technology to realize a society where future generations can live with joy and hope.

Promotion of the Future of Innovation Challenge (FIC) activities

In FY2020, the Fujitsu General Group launched the Future of Innovation Challenge (FIC) initiative to create new value with the aim of realizing a society where children can live with joy and hope. In order to gather ideas from a broader range of perspectives, all employees of the Group are invited to participate in the FIC, a new business creation activity that solicits ideas from individuals to start and scale up businesses that solve social issues. FIC solicits ideas internally and selects the best ones through multiple rounds of screening. The presentation pitch (second round) was held on December 23, 2020 at the Center Court on the fifth floor of the ICC building*, after which the ideas that passed the final selection moved on to the phase where they will be considered for concrete commercialization.

Promotion of Being Innovative Group (BIG)

In 2016, we launched the Being Innovative Group (BIG) organization dedicated to embodying the idea of "creating and delivering new value to the world," working on innovation through small-group activities. The wearable air conditioner "Cómodo gear™," created as a result of BIG activities, has been available since June 2020.

Joint development with Rheem, a U.S. manufacturer of air conditioners and water heaters

Fujitsu General and Rheem, a U.S. manufacturer of air conditioners and water heaters, began mutual OEM (Original Equipment Manufacturer) supply in 2017 based on a strategic partnership, and have been expanding and complementing the product lineups of both companies.

In August 2020, as the first step of the joint development, a multi-position type* whole-house air-conditioning system was developed, integrating the technologies of both companies, and launched in North America.

The model jointly developed this time is a hybrid product, in which we developed the outdoor unit and Rheem developed the indoor one. It is a compact, single-fan type that is very quiet, and it has a maximum cooling capacity of 4 tons (13.6 kW). It has also achieved the best in industry with a rating of SEER 17 for energy efficiency.

In addition, a newly developed control system has been introduced to enhance comfort by constantly blowing the appropriate amount of air into the room.

We aim to further expand sales in the North American market by adding to our product lineup, new products that combine the technologies of the two companies and excel in energy efficiency, quietness, and comfort.

*
Indoor units that can be installed tailored to North American housing structures.

In 2017, Fujitsu General reached a basic agreement on a comprehensive alliance with G.I. Holding, an Italian HVAC manufacturer, including joint development with the aim of expanding the commercial air conditioning business in Europe.

In the European commercial air conditioning market, it is important to have not only the multi air conditioners for buildings that we already have in our lineup, but also a lineup of large air handling units (AHU*2) and chillers*3 for the commercial market.

Currently, our European R&D Center is playing a central role in the development of AHU’s and compact inverter chillers.

We have developed an inverter air conditioner with a high energy-saving performance, and introduced it to the world.

We are keen on promoting the development and popularization of products that use refrigerants with ability to reduce GWP (Global Warming Potential) and achieve zero ODP (Ozone Depletion Potential). As part of the product development process, we not only focus on the greenhouse emissions released by the product itself, but also work to reduce greenhouse gas emissions associated with all aspects of production, from raw materials to final disposal of the unit.

In Europe, room heating is based on radiator and floor heating which runs off of a central hot water supply, with approximately 80% of the domestic energy consumption represented by room and water heating.

In recent years, with the support of the French government in refunding the cost of equipment and installation, there has been a shift from combustion heating equipment using fossil fuels (oil, coal, etc.) to highefficiency heating equipment [ATW (heat pump type*1 hot water heating system)] that does not emit CO2 during heating and is environmentally friendly and energy efficient in order to counter climate change*2.

*1
Heat pump technology effectively utilizes the renewable energy of air heat derived from solar energy by collecting the ambient heat in the air and supplying it indoors, and it is expected to become more and more popular in the future.
*2
In Europe, heat pump technology is already approved as a renewable energy*3 to facilitate room and hot water heating.
*3
The advantage of renewable energy is that even if it is used once, it is regenerated in a short time, so that it can be used again and again to achieve an energy reduction.

Promoting the efﬁcient use of resources (air conditioner)

Through the deployment of a design which saves and efﬁciently utilizes precious resources, we will contribute to a sustainable society.

Multi (multi-unit) air conditioners for stores and offices in Europe "AIRSTAGE®" J-III L series has realized a compact outdoor unit by changing the heat exhaust port of the outdoor unit and optimizing the component parts(compared with the conventional model, reduction in depth of 285 mm, installation space 45%, product weight 58 kg).

The structure and capacity of the outdoor unit's heat exchanger were also reviewed with the result being an approximate 18% reduction in refrigerant as compared with conventional models.

The OPERA Project is the outcome of an industry-academia collaboration policy aimed at full-scale Open Innovation, led by the Japan Science and Technology Agency. Fujitsu General Group participates in a project led by the Center for Preventive Medical Sciences, Chiba University, and works on WACo (Well Active Community: creation of healthy and active community) based on "Primordial Prevention*" with related researchers and companies.

*
A new concept advocated by the World Health Organization that refers to a living space/community that makes people healthy and active without conscious effort.

"The comfort" that people feel has both psychological and physiological aspects, which do not necessarily coincide with each other.

In order to clarify the impact of discrepancy between these two aspects on the physical condition, experiments are conducted to quantify "comfort" using brainwaves. These experiments aim to create indoor spaces that are healthy for both body and mind.

The extreme heat caused by global warming is a social issue without political boundaries. Our new product "Cómodo gear" is a wearable air conditioner that efficiently cools the body and was rolled out to Japanese customers in June 2020.

"Cómodo gear" is effective even on extremely hot days when the temperature exceeds 35°C*. It functions by cooling the blood which flows through the wearer's carotid artery. It can be used by simply attaching it to the neck (cooling part) and the waist (radiator and battery), and can be expected to prevent a decrease in work efficiency even in high temperature.

In the future, we will continue to work on adding new features in order to make "Cómodo gear" even better, both in terms of comfort and performance.

*
Cooling performance may depend on environmental conditions

We provide optimal services to our customers on the strength of a wide range of solutions. Our solutions in public-sector business include Fire-fighting systems for protecting human lives and property, and Disaster response systems for maintaining safe, secure lifestyles, while in the private sector we serve the restaurant industry, provide solutions for outpatient management, and much more.

Our fire response system supports activities to protect the lives and property of residents by providing and managing information comprehensively to ensure the right decision is reached in the minimum amount of time.

Keeping in mind the large-scale natural disasters that have frequently occurred in recent years, we will continue to contribute to the creation of a safe and secure future through further strengthening the maintenance services critical to the stable operation of these systems.

Fujitsu General OS Technology is working to help solve the current shortage of human resources in Japan while taking into account the need for achieving a work-life balance in the food service industry.

We have been providing our e-Order service free of charge to companies and businesses that have been greatly impacted by the pandemic of COVID-19.

This solution helps to promote business continuity and provide improved service by increasing the possibility of receiving orders for the food and beverage industry. 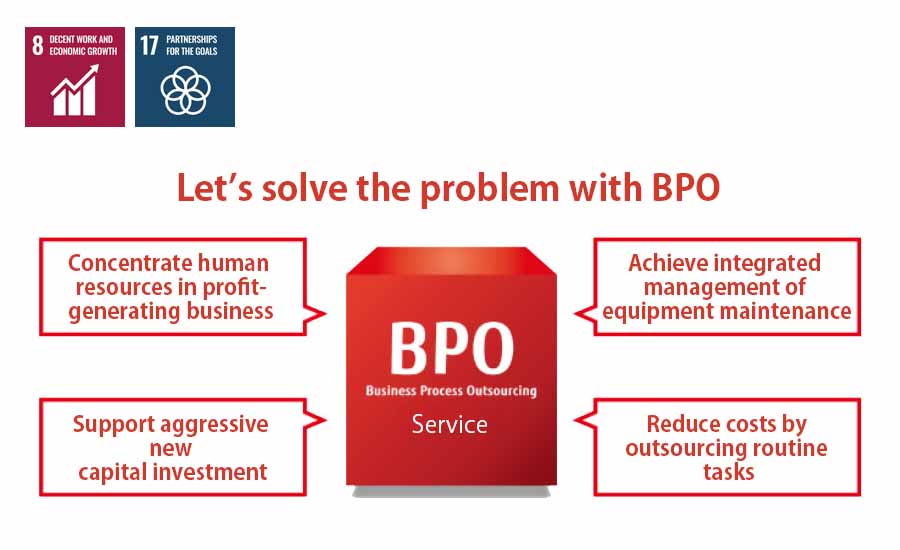 After streamlining and standardizing non-core operations (that do not produce profits directly) throughout the customer's business, we create a standard manual which allows our staff to carry out these operations on behalf of the customer. As a result, the customer becomes able to shift their in-house resources to focus on corporate growth or core business while outsourcing non-core activities.

*
A service that uses the system to outsource the very work customers used to do.

*
The numbers next to the title correspond to the SDG numbers to which we believe our activities can contribute.